I’ve seen a lot of speculation out there asking the above questions. I can now finally answer.

myHack v4 was nearly ready a few months ago but I have been so preoccupied there was simply no time to complete it and prepare it for release. Why? Because approximately 4 months ago my family and I decided to move back to the United States after 7 years in South Korea. This was a difficult decision to make, and was incredibly complex and time consuming to accomplish. I did however take the time to migrate this website to a new host to ensure there would be minimal disruption or downtime while myself and my hardware traveled across the globe.

I wanted to explain this months ago, or at least before I left but there were personal and professional reasons for not doing so. Not everyone was aware that I was intending to move and I wanted to keep it that way until I was gone. We arrived here about two weeks ago and are adjusting to our new timezone and environment. With the holidays we are also distracted by reuniting with family whom we have not seen in many many years, some whom have never even met our children. So it may still be a little while before I can get everything done on here that I have planned but it is most certainly going to be done. I have not abandoned the project but it does require a rather large investment of time to keep it going. Despite what some people have speculated I make no profit from this so it is low on my priority level, perhaps in the future that may change.

myHack 4 actually supports Yosemite fine, I had it working within 12 hours of DP1 being seeded by apple, there are other portions of myHack v4 that must be completed prior to me being able to release it to the rest of you however. 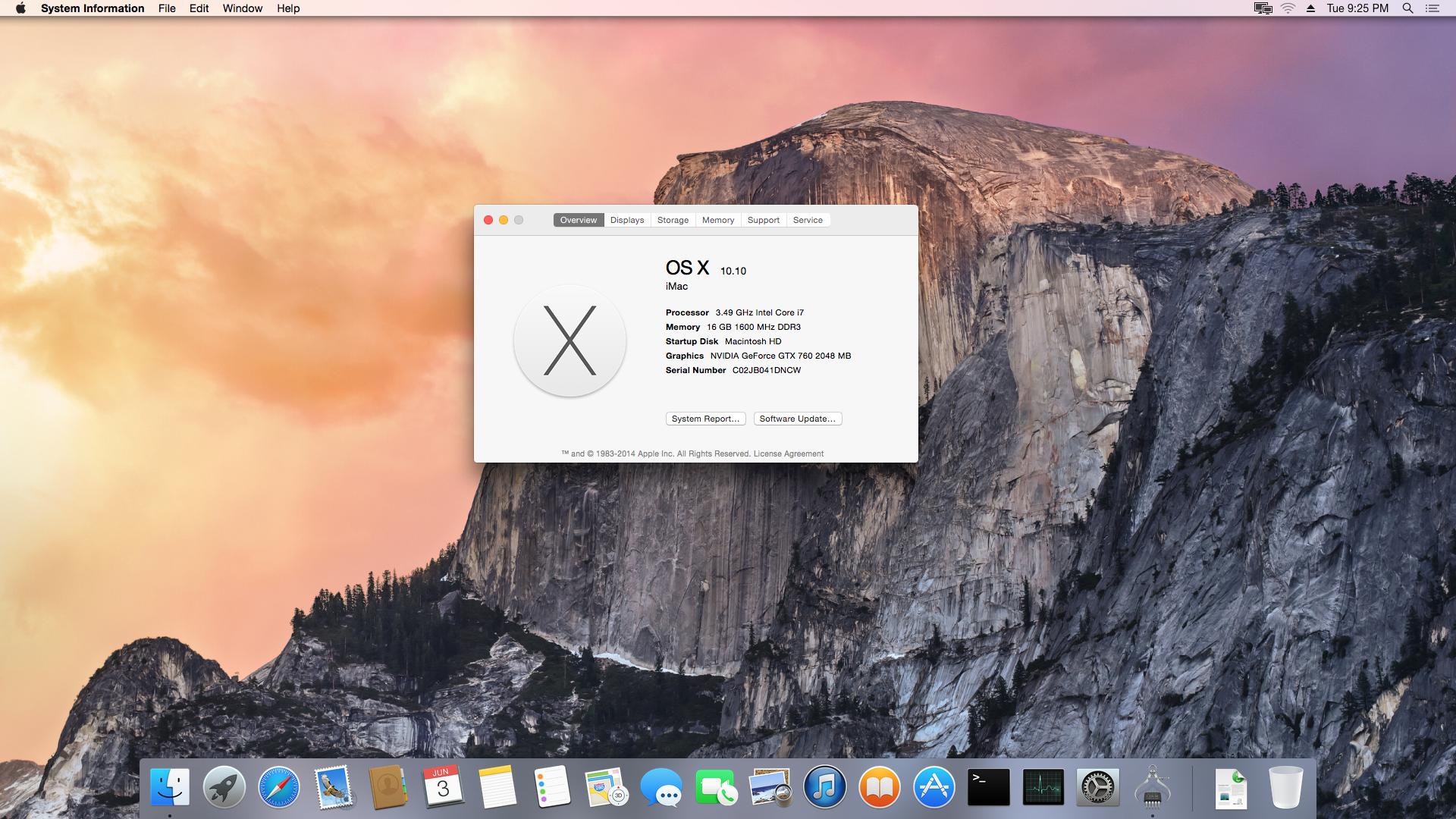 This is a work in progress, but demonstrates this can be done. This was done with myHack v4 and some manual tinkering. We have been working on patching chameleon for this, but currently chameleon is still not capable of booting 10.10 (we have gotten it as far as loading kernel and extensions, but there is an instant reboot on framebuffer init on every system we have tested so far). I resorted to using clover for now, just to see if the other modifications were functioning correctly.

Please be patient. My suggestion for now is if you want to explore some of the new features to simply install 10.10 in VMWare fusion (You will need version 6+ of fusion), it’s a trivial process requiring only 1-2 minutes of user interaction. 10.10 DP1 is NOT ready for any production use. As soon as we have worked with it more and I have updated myHack with our new methodologies there will be an announcement and alpha release of myHack v4 for you to experiment with.

As you may or may not have heard, I have been working on myHack version 4 since november. I wanted to get this out sooner as it resolves all known bugs that exist in the current release version of myHack, but it has been a great deal of work… I have been quite ambitious with this release. In an attempt to speed development I have dropped everything and worked on this full time for over a month now, but it is still not quite ready yet.

Once I complete the core features (everything myHack version 3 can do and more) I will be releasing it while it is still in alpha. The pace of development at that point will depend on how much time I can allocate to it, which will depend, at least in part, on how much support I receive from you, the end users.

A brief summary of what has been done so far:

No more popup dialogs (all dialogs are modal now, all configuration is done prior to runtime initialization and persisted to a stored settings plist). No more having to quit the program before each function is run, sudo password is stored between functions – but not between application launches (it is only kept in secure memory), interface is completely native Cocoa + Objective-C with function processing and progress reporting still being done in a webview, handlers are linked between Objective-C, C, and Cocoa.

There are many more changes planned that I am working on for the initial release, many more which have been made that I am not mentioning here, and many more that are planned for after the initial alpha release is made and new website is launched. This is by no means a comprehensive list, I just wanted to let everyone know that while I feel I should apologize for the delay since the last release was made, that myHack is under very active development and the next release will be well worth the wait.

Here it is, thanks to schnitzel slaving away over a decompiler and myself rebooting and testing numerous times we have finally found a very clean method of patching the 10.9.0 OSInstall.framework to allow for MBR installation. I am aware there is another patch which has been circulating, I even took a look at a decompiled diff of it – which is why I chose to develop our own patch rather than using it, folks, it was ugly, I was concerned that with as hacked up as it was it may result in unforeseen problems to end users. Our patch replaces only 3 8-byte chunks (similar to the ML and L patches contained in myHack). Clean and effective.

The following notes carry over from the myHack 3.3 release, I wanted to get the MBR patch out before putting more time into the rest of the planned updates.

Also please note that you should not run myHack.app from the .dmg it is distributed on. You should copy it to your local disk first.

I will add checks to warn users who accidentally make these mistakes to myHack in the next release to provide additional error prevention to users, but I did not want to wait to release this version any longer so for now these warnings should be enough.

Additional details of the myHack app’s contents, credits, and instructions are maintained on the guide page.

Feel free to post thank you comments and whatnot on this post but for support or to report a problem you encounter – please use the Forum or the #hackintosh channel on SojuGarden IRC.

In case you were wondering why this site was down for about 5 hours today, last night we had one of the most severe thunderstorms of this monsoon season here. The lightning and thunder was some of the most intense I’ve experienced in recent memory. It was striking several times per minute all over my neighborhood – it felt similar to the controlled demolitions of buildings I’ve witnessed from a few blocks away, it wasn’t a crack it was a hard hitting thud that rattled your chest and bones.

I generally enjoy thunderstorms but this one was more than inconvenient. I was in the process of working on updating the template for this site when the power went out, and stayed out for over 5 hours. Additionally more than 18 people are dead, the power is still out to many homes, and fortunately I don’t have to commute to work because the transportation system is in chaos.

They say a picture is worth a thousand words so here are a couple pictures from down the street to illustrate:

From the Korea Herald:

The Korea Meteorological Administration said downpours tallying a record 60mm per hour were recorded in the country’s central and southern parts.

Southern Seoul was the hardest hit part of the capital.

The building of the educational TV station, EBS, was flooded and SK Telecom’s mobile networks. Flooding was reported in streets, subway stations, underground walkways and residential districts throughout the city.

A number of flooded main roads in downtown and southern Seoul were closed to traffic, while a motorway linking Seoul to southern Gyeonggi Province was closed due to a landslide.

I live in Southern Seoul and it is still raining…

So if this site goes down again sometime in the next day or two, you know why… but I am hoping the worst is over. I have also just realized that I lost about three weeks worth of work on an important project I was working on – my workstation drives shorted out from the lightning and I was in the middle of syncing a backup at the time, so I only have a partial copy on my server. All attempts at recovering the data have failed… %#&@*!

This is from CNN:

More than 750 rescue workers had been dispatched to the site after the collapse occurred at midnight, according to the Central Disaster Relief Center.

About 400 families have lost their homes and more than 14,000 were left without power.

The hillside gave way during a summer of record-setting rainfall, which has caused flooding and major traffic disruptions across portions of the country.

Chuncheon is about 75 kilometers (45 miles) northeast of the capital, Seoul, which has seen more than 400 millimeters (15 inches) of rain since Tuesday.

Sixty households in the capital have been cut off by high water, and six people are missing, the disaster center reported.

The Korea Meteorological Agency has issued a special heavy rainfall alert for cities in the center of the country. The forecast calls for the downpour to continue at a rate of 60 millimeters (2.4 inches) per hour over the next day.

“This is a lot of rain considering that the amount we saw yesterday and today consists of three-quarters of what we got during the rainy season,” Cheung Kwan-young from the meteorological agency said.

South Korea typically experiences a rainy season during the summer.

Copyright © 2009-2012 SojuGarden.com. All Rights Reserved. | This site is best viewed with Chrome, Firefox or Safari.